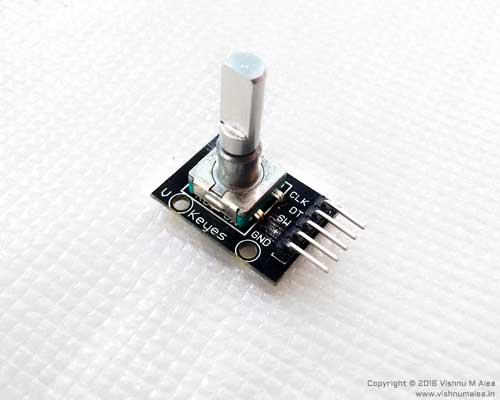 If you want to know more about a rotary encoder and how it actually works, go to Dejan Nedelkovski's rotary encoder tutorial here. He has also published a well explained video tutorial of rotary encoder which can be found here on YouTube. Continue from here after you've done that because I'm not going to talk about how it works in detail. 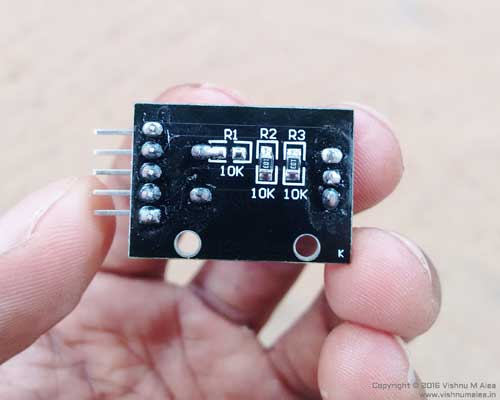 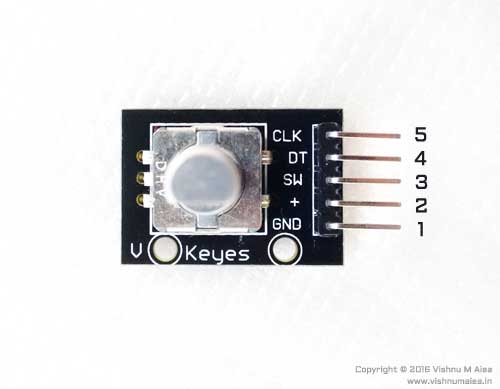 Following is the schematic of my breakout board. Two 10K pull-up resistors are connected to pin A (CLK) and B (DT) and tied to +5V pin. The common pin of the encoder is connected to GND pin of the board. My breakout board is missing a 10K pull-up for the center switch which isn't necessary if you have it in your controller already. The center push button is activated by pressing the pivot against the board. It could be used as a mode select switch. The output of the switch is available at pin SW. The encoder I have has 30 steps or resolution which yields 12° per step which is enough for control input. 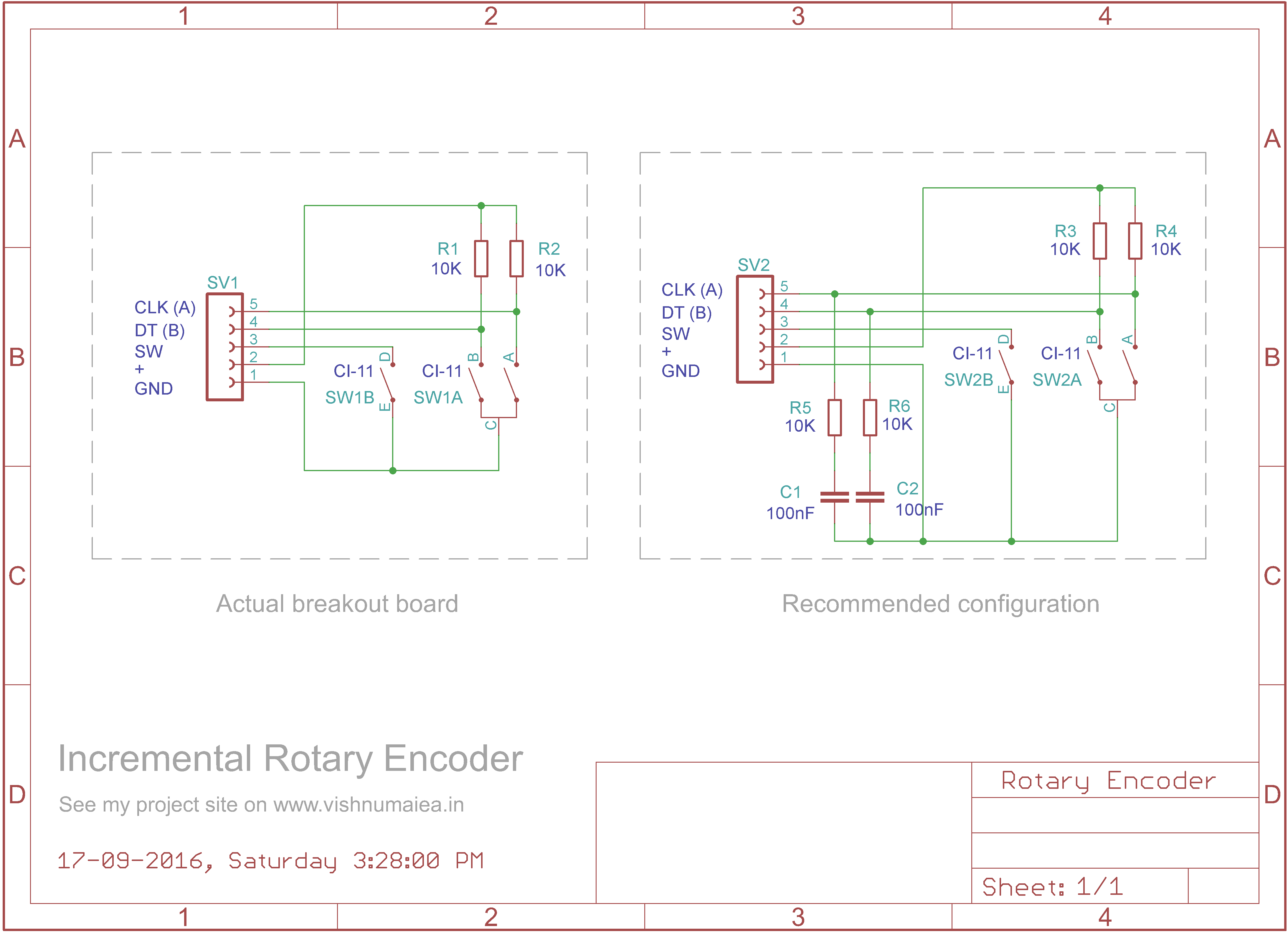 Simply connect the breakout board as per the schematic and pins A and B to digital Pin-6 and Pin-7 of Arduino Uno board respectively. Then upload the code from Dejan Nedelkovski to your Arduino board to test your encoder.

If everything is done correctly, when you open the serial monitor and rotate the encoder you'll see the the rotation count printed there. 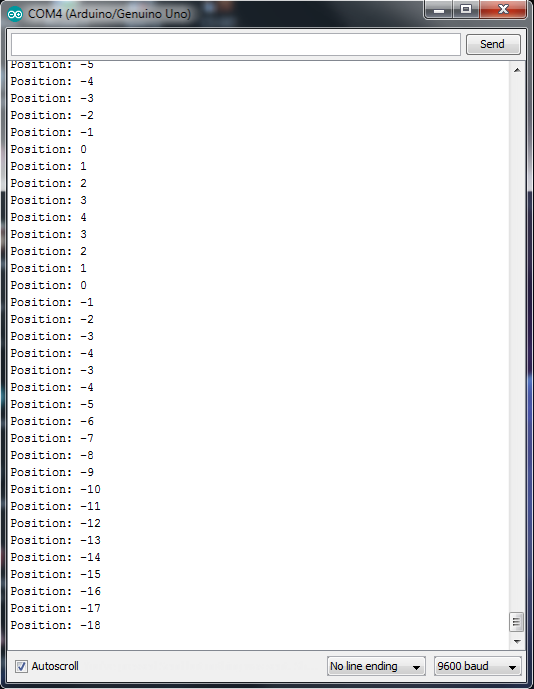 So far we're good. But there's a problem. Basically, the above code is just for checking the encoder and see how it works. But for practical applications, that's not enough or it won't work the way you want it. Because the above mentioned code uses "polling" to detect any change in the encoder position. That means the loop in the code just continuously checks the status of the encoder and updates the counter. But what if your code has to do more than that, and that adds a delay to it ? That's the problem! You might miss some increments produced by the encoder. So how we're going to overcome this ? There's a way and that is to use interrupts in your code. By using this method, you can do anything with your code and still not miss any change from your encoder. The interrupt routines will only be called when there's an actual change occurs to the encoder position when you rotate it.

Kevin Darrah has an encoder video tutorial and interrupt based interfacing code. But his code didn't work for me. So I decided to write my own. Following is the encoder output waveform at clockwise and counter clockwise rotations. We need this to design our code. 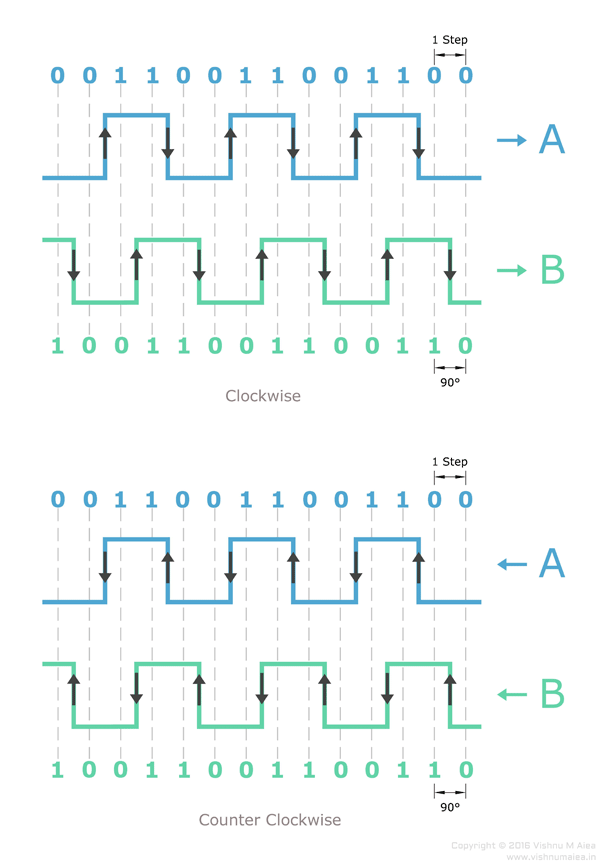 From the output wave diagram it's obvious that pins A and B produce different output pairs for clockwise and counter clockwise rotations. We can use this to design an ISR (Interrupt Service Routine) to update a counter. We have to only use one pin to detect the rising edge and falling edge to run the ISR because the other pin's state won't change at that time. Here we'll use pin A (whatever physical pin that is) to detect the rising and falling edge and thus run the ISR. When pin A changes its state by rising or falling, the state of B will be unchanged. That's the idea. Here's the code I wrote.

This code is written for Arduino Uno to use interrupts of it. Digital pins 2 and 3 are the interrupt enabled pins in Uno. So connect your encoder accordingly. If you're using a different Arduino board, set the pins as per that.

See this code at GitHub

Unlike many other interfacing codes you might find on the web, this code does not "miss" steps and doesn't add any delays intentionally. It only uses a single pin to detect rising and falling edges (and thus any state changes) to trigger the ISR and therefore the code and its logic are less complex and easy to understand. I had spent a whole day on this.

For counter clockwise rotation, rising edge and falling edges of A will be equal to the state of B. You can see that in the waveform diagram. So we can just check if SIG_A equals SIG_B whenever a state change occurs to output A.

But there's a small issue. Just checking if A equals B does not determine whether the encoder is rotated clockwise or counter clockwise. If you take a closer look at the waveform you'll notice that the state change happens to A in the same part of the graph could be a rising or falling edge. As we're not detecting rising or falling edges of A directly but just detecting any state change, we can not be sure about whether we had detected a rising edge or falling edge. To determine that, we need to know the previous state of A or B. Here I've used B's current state and last state to determine the falling edge and rising edge of A, because it'd be more easy to interpret it from the waveform. So that's the logic of the following lines,

In the first if block, we save the current state of B to lastSIG_B. But in the next else if block, we save the lastSIG_B as the inverse of the current state of B. This is because we're not detecting any change happens to output B. Such change to B happens halfway around when we rotate the shaft for one step. So there's no way can detect it when it happens. But we could assume what would happen. Therefore we save the inverse of SIG_B to lastSIG_B so that next time we detect a clockwise operation, we won't miss a step. Otherwise you'll miss intermediate clockwise steps. Try disabling the line lastSIG_B = SIG_B > 0 ? 0 : 1; or replace it with lastSIG_B = SIG_B; to see what happens.

That's it. I hope you understood my code explanation. Well if you didn't, please figure it out yourself and tell me if I was wrong anywhere. I'd appreciate that. Have a successful interfacing time.