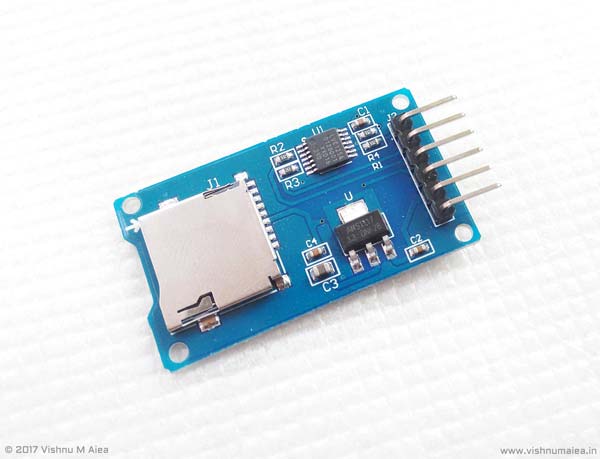 There'll be times when you have to store large amount of log data and other information for your Arduino project, for example a GPS logger. The EEPROM memory of all available microcontrollers are limited in size. The solution is to use a NAND Flash memory. The portable version of a NAND Flash memory is available as SD cards, in many storage sizes and form factors. SD cards and USB flash drives have become an indispensable things in our everyday life.

Though you could insert an SD card in your phone or computer easily and browse all your files, hardware interfacing an SD card of any type with Arduino or similar development boards isn't that easy. You could understand it just by reading the SD card spec sheet. The Secure Digital (SD) standard is maintained by the SD Card Association. They standardize and publish all the related specifications to manufacture and implement SD cards. Most of the documents are confidential and are only available to manufacturers and software companies. A simplified version (it isn't that simple) of the SD card specification is available for the public in the SD Card Association's website.

What we're going to do here is to interface a microSD card with an Arduino Uno using the SdFdat library developed by William Greiman and is based on the Simplified SD Card Specification. Before we delve into the interfacing, let's have a basic understanding of what an SD card is, how it is organized, different forms and pinouts of it. 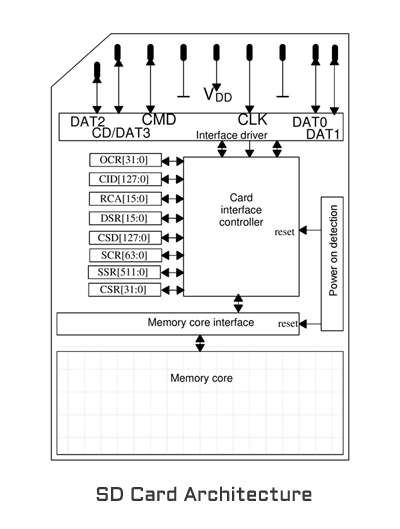 The microSD card is a type of removable NAND-type small Flash memory card format which was introduced in 2003. microSD measures 11mm x 15mm and is 1mm thick. Internally the card is organized as interface driver, card interface controller and memory core.


The interface driver connects to the external interface pins. This sets the pins to appropriate modes and select and monitor the operating voltage and other parameters required for physical interfacing. The card interface controller is the section that processes user commands and read from or write to the actual memory core. It has many registers associated with it. The memory core is where data is stored. It is typically a NAND Flash memory.

The SdFat library requires a properly formatted card to work exactly as we want. The library supports FAT16 and FAT32 file systems, though it is recommended to format to FAT16 when possible. You need a card reader and a PC to format the card. If you're on Windows 7, right click the card volume icon and select the "Format" option. Now a window will open on which you have to select FAT or FAT16 from the drop-down list for file system and then click "Start Format".

There are 8 pins on the microSD card which you should avoid touching as you may damage the card, even though it's protected against ESD. There are two ways a microSD can be interfaced with a microcontroller - SPI mode and SD mode. The pin assignments for these modes are different. The SD mode is the fastest and is used in mobile phones, digital cameras etc. The Serial Peripheral Interface (SPI) mode is slow but requires less overhead compared to SD mode and is compatible with any microcontroller with built-in SPI. So we'll be using the SPI mode and its pin assignments. 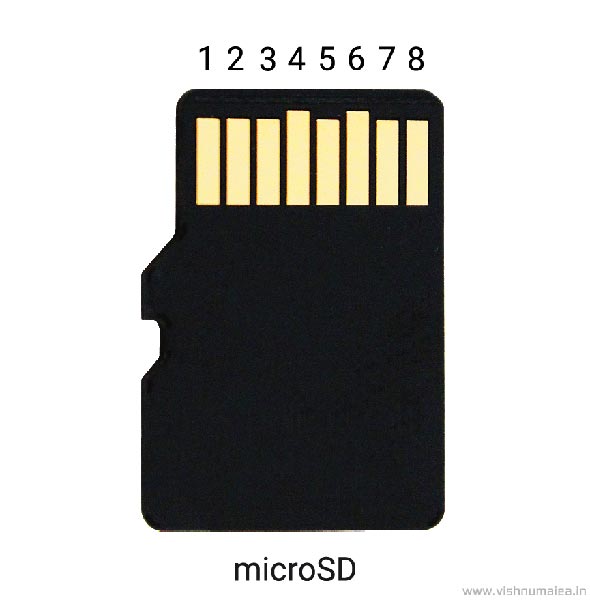 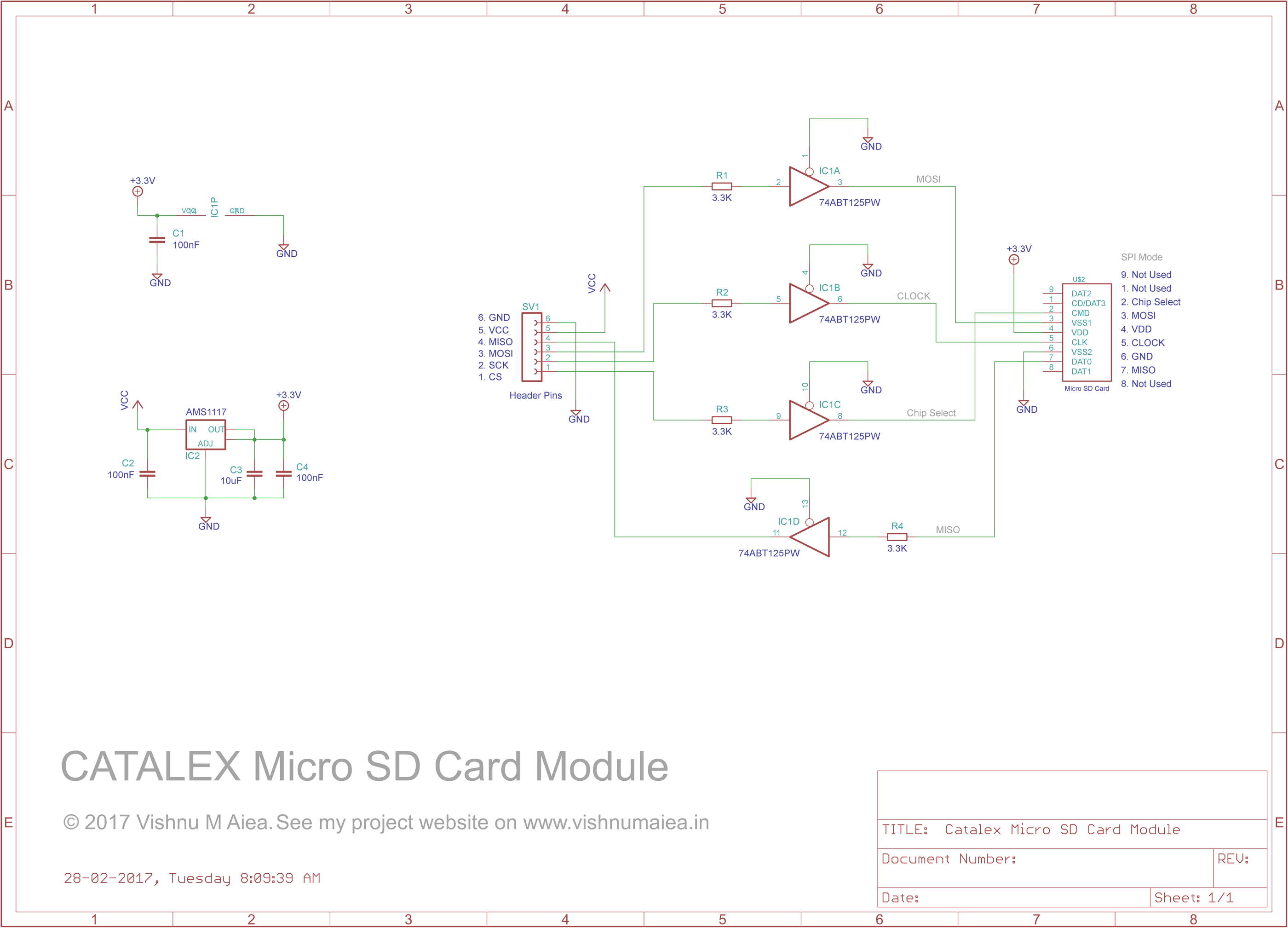 I had bought a couple of Catalex Micro SD Card Adaptors from inkocean for Rs.70. What is "Catalex" you may ask. I don't know; it's just printed on the back of the PCB with a dead link that redirects to a Chinese site. I couldn't find any datasheet or schematic for the module. So I had to design one myself. 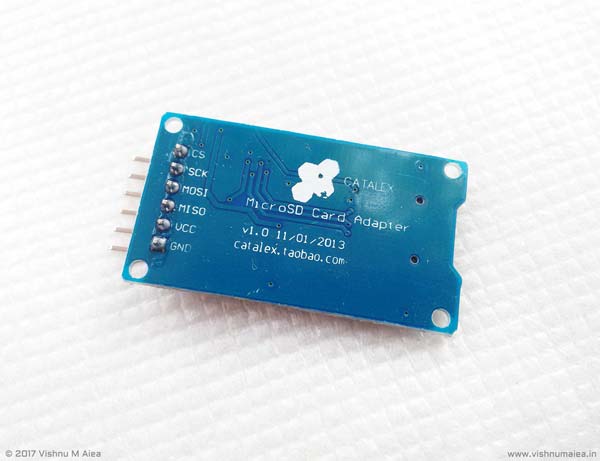 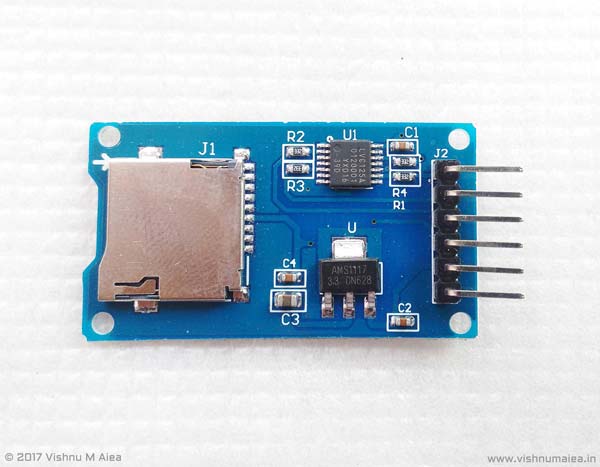 A micro SD card has an operating voltage of 3.3V. If your host board uses 3.3V as the logic supply (such as Arduino Due), then you do not need this module at all. Instead, you can directly interface the card to the microcontroller from the card slot. But if your microcontroller operates at voltages exceeding the 3.3V, then you need a logic level shifter such as the module we're discussing about. This is because, any voltages exceeding 3.6V will damage the SD card permanently.

The 741VC125 on the module is a quadruple 3-state buffer. It can translate the 3.3V logic signals from the card to and from a 5V Arduino Uno if we provide 3.3 - 3.6V as supply voltage for the buffer. This is called logic level shifting. Three of the pins, MOSI, SCK and CS carry signals from the Arduino to the card and the MISO carries signals from the card to Arduino. Therefore one of the buffer is connected in reverse order (see the IC1D part in the above schematic). All the four buffers have 3.3K resistors in series for protection.


But there's another problem; as the ENABLE pin 13 of the MISO buffer of 74VC125 is always tied to ground, other slaves, if using multiple slaves, on the same SPI bus cannot communicate with the master as the signals will interfere each other. Slaves actually need to activate high impedance state on the MSIO pin when not selected on a common SPI bus. So to use other slave devices along with this module, you need to make some small changes. First disconnect the pin 13 of the buffer from ground and then tie it to the respective SS pins of the master, probably with a pull-up. This way, the MISO of the module will be brought to high Z state when it's not selected. Thanks to Christian Charlot to pointing out this issue. Below is a modified schematic to allow multiple slaves on the common SPI bus. 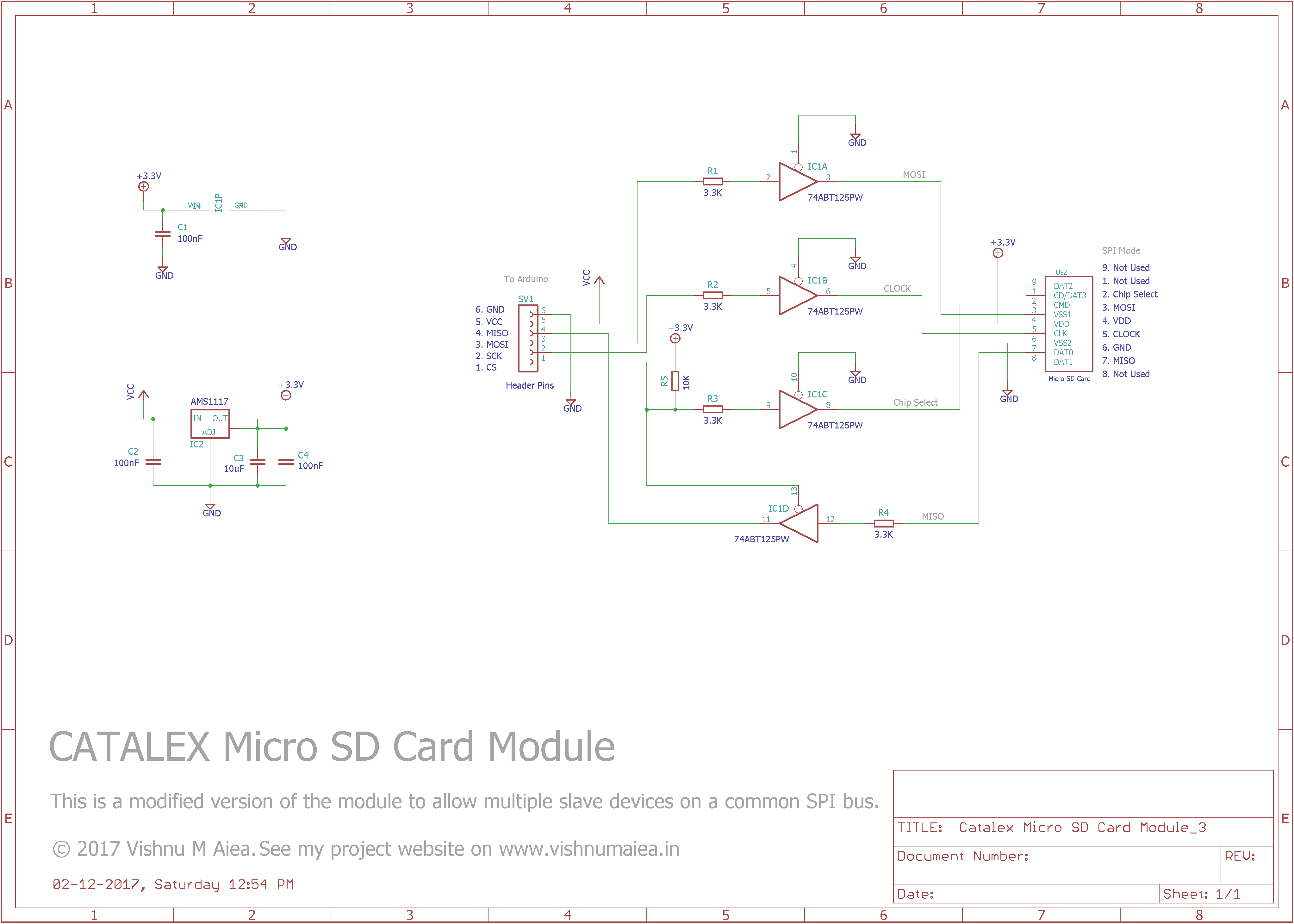 Even though the microSD card has 8 pins, we need only 6 pins to interface it using SPI and thus has 6 header pins soldered on it. There are two supply pins - VCC and GND. VCC is connected to 5V and the on-board low drop regulator AMS1117 will provide 3.3V to the card and the buffer IC 74LVC125. The MISO (Master Input Slave Output), MOSI (Master Output Slave Input) and SCK (Serial Clock) are connected to the respective pins of the microcontroller. The CS (Chip Select) is connected to the Slave Select (SS) of the microcontroller. In fact, you can use any digital pins to connect to the module and bit-bang the SPI protocol using any library. But it'd be better to use the hardware SPI for some reasons. I've provided a wiring schematic below and to make it easy for you, the wiring procedure in steps too. If you're using another Arduino model, just use the respective pins. Connect, 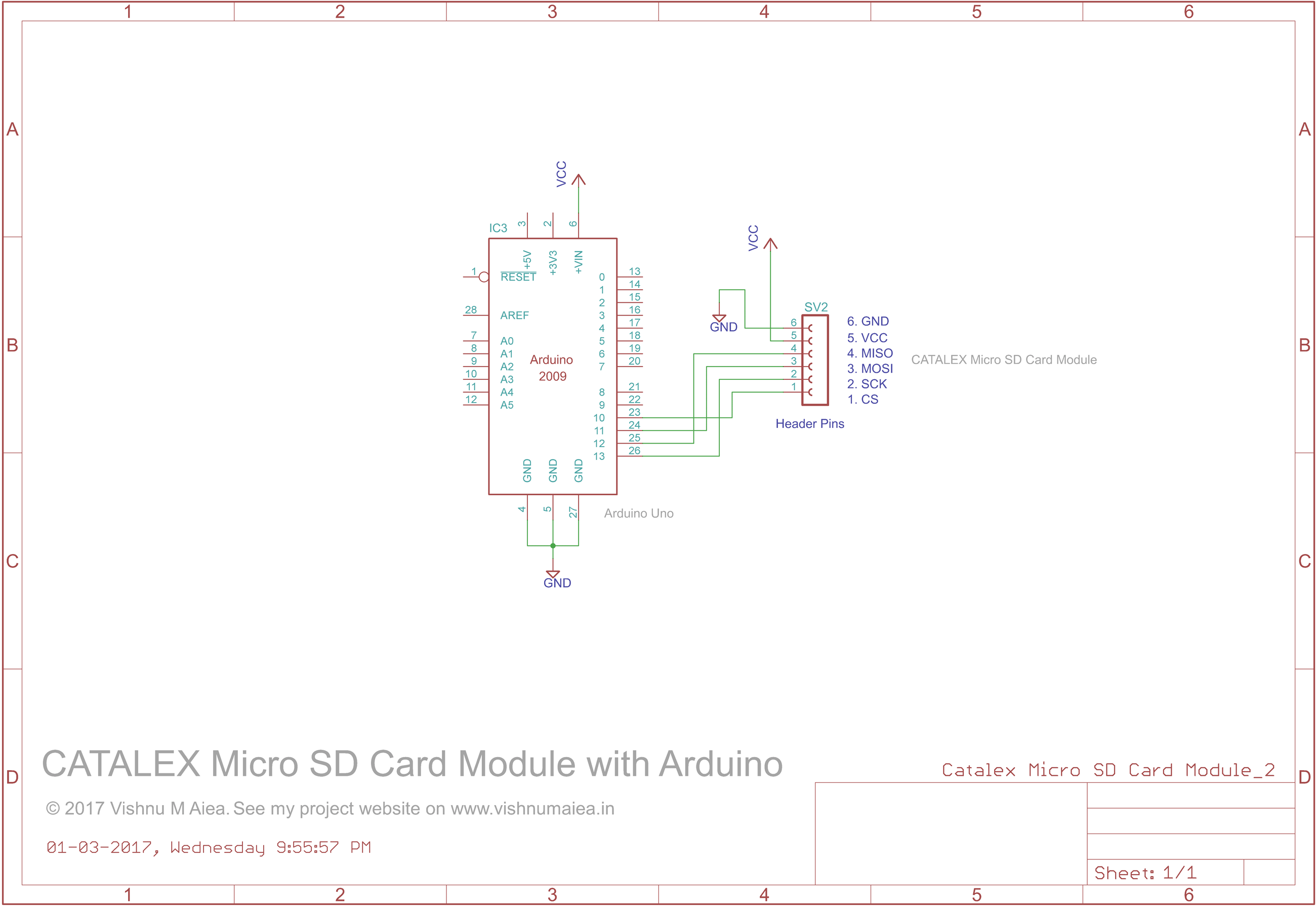 In Arduino Uno, the digital pin 10 (pin 16 of ATmega328P) is the dedicated Slave Select (SS) pin. But you could connect the CS of the module to any digital pin of the Uno by initiating the card with SD.begin(pin). The SdFat library we'll be using needs the digital pin 10 (SS pin on Arduino) to set as output, because the SS will be still manipulated when hardware SPI is used. So changing its state to digital output might disable the SPI. There will be usually a Chip Detect (CD) pin from the SD card slot. But unfortunately this Catalex module doesn't have a CD output. So that's all about the wiring. Here's a pinout of an ATmega8/168/328 if you are confused. 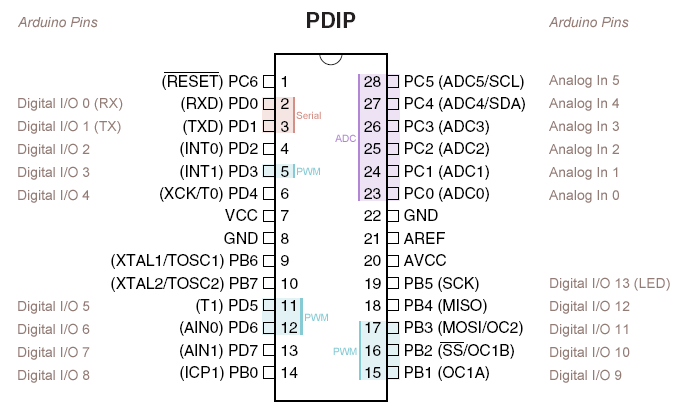 If you have connected the module with Arduino, now we can upload the code to read the card information. The program is available from the example library in the Arduino IDE. Go to File > Examples > SD > CardInfo. Now the program will be opened in a new window. On the 36th line, change the value of chipSelect from 4 to 10, if you had connected the module as we said earlier. Otherwise set it to the pin you chose. Then compile and upload. If everything was done correctly, you can see the card information printed when you open the serial monitor. 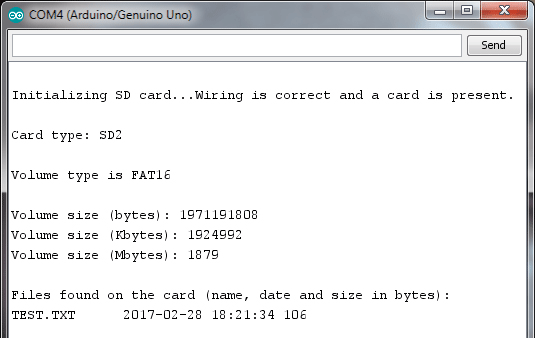 If nothing shows up, chances are you did the wiring wrong. Go back and check if everything's done right. If wiring is right and the card you inserted is faulty, then an "inititialization failed" message will be printed along with some troubleshooting tips.

If the wiring is right and the card is well formatted to FAT16 or FAT32, then the program will print the card details and list of files present in it. If the SD card is not properly formatted, the following message will show up.

As I mentioned earlier, we'll be using the SdFat library for which we should thank William Greiman. The Arduino IDE comes with the SD library. So all you have to do to use the library is include the SD.h file in your code. The SD library is well documented in the reference section of Arduino website. Head over to there and read about the available classes, functions and their return types. The CardInfo.ino program uses some utility functions that are not documented in there. You can find those information and more in the GitHub page of the SdFat library. The repository contains an HTML documentation.


I've written some code to initialize, write to and read from the SD card through simple commands. This would help you to be conscious of what happening rather than opening the serial monitor and seeing everything printed automatically. The following code initializes the card when you type and send the command i.

View this code at GitHub

Below is a code that'll initialize the card, open a text file called TEST.txt, create if there isn't one, write a piece of text to the file, read and print from the file. Type i to initialize, n to open/create a text file and r to read and print from the file via serial monitor. There's one thing to be aware of : file naming convention. You can not have files named like I Have Some File Here.txt. Because the SD Card library only supports the 8.3 or Short File Name convention. As per SFN scheme, the file name must be of maximum 8 characters + a period + three character extension (thus the 8.3) and the name is not case sensitive.


View this code at GitHub


I've thoroughly commented the code. So I hope you wouldn't find it hard to understand. The card is initialized just like we saw in the previous program. The boolean variable sdInitStatus keeps track of the card initialization status. The file is opened with write mode when you enter n and if there is no file with that name, the write mode will cause a file to be created and then opens it; just like in the C/C++ file handling programs. An object of type SD is used in conjunction with the println() function to write to the file. Note that data is written to the file only when the functions close() or flush() is invoked. Make sure to do that right when you write a program for any application.


Here we're using a separate function to read any text from the file until a newline character (\n whose DEC equivalent is 10) is found or the EOF reached. The function uses peek() to determine the end of file which returns a -1 at EOF. Unlike read(), the peek() doesn't increment the actual file position after execution. The seek() function sets the file position to desired point in file. We have used this to relocate the file position to the start of the file when EOF is found so that we can read the file again.


Text is read to a char array readCharArray[] and then converted to String type using type casting.


Now you know how to include a Micro SD card in your next Arduino project and learned what the SD card library can and can't do. I hope you enjoyed reading this tutorial and learned something new. If you found any error with the descriptions, code or missed something important, however small it is, please feel free to inform me. Thanks for reading.