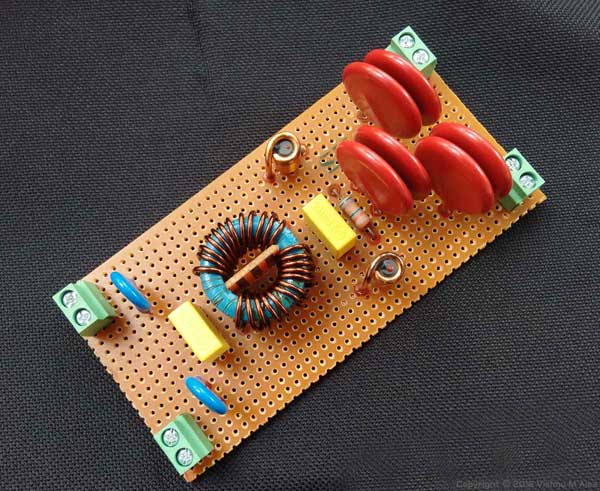 It was when my laptop computer got hit by a lightning surge causing severe damage to it - I realized the importance of a Surge Protector. The surge came through the coaxial cable to the modem and then to my computer through LAN cable. I was then using RJ45 for Internet. Then I switched to Wi-Fi thinking surges wouldn't damage my computer anymore. But they still remain as real threat to my electronic devices. I've lost many other devices such as my modem, many adapters etc due to surges from power lines. Coaxial cables and many other networks make use of electric posts for distribution. Therefore they're the most vulnerable to lightning surges. A lightning directly striking an electric post could cause a large amount of energy to pass through the power lines and other nearby cables to your homes and devices connected at the end, before grounding, leaving unserviceable damage to your equipments. Due to this, many countries have rules that legally enforce installation of SPDs (Surge Protection Device) both for residential and industrial power distribution and communication networks.

There exists many techniques to suppress surges, a few being Metal Oxide Varistors (MOV), Transient Suppressing Diodes (TVS) and Gas Discharge Tubes (GDT). They all work based on different principles but when combined, maximizes protection. 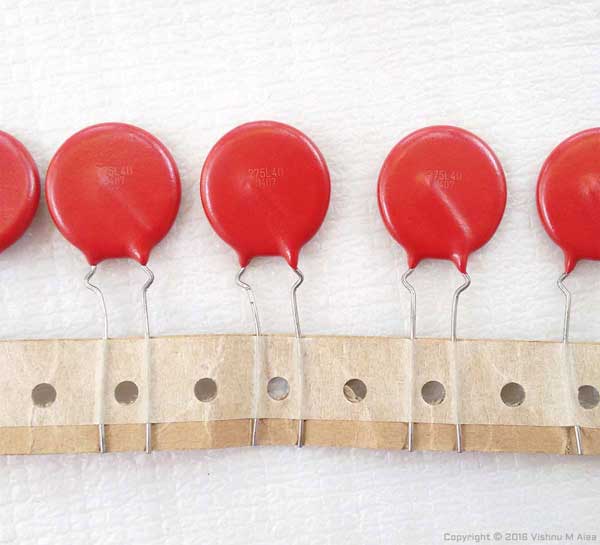 A line filter is a passive circuit consisting of mainly passive components such as capacitor, inductor etc. It is used to limit or suppress electrical noise generated by a device or entering to it. EMI (Electromagnetic Interference) or RFI (Radio Frequency Interference) are mainly generated by electronic devices operating on high frequencies with inadequate shielding and filtering and other inductive loads. SMPS (Power adapters), electronic chokes and other inductive loads contribute a good amount to the generated EMI. A typical EMI filter used for AC power line is as follows.

There are two types of noise; common to Live ans Neutral wires called common mode or CM, and differential mode (DM) noise that appears as a voltage difference between L and N. The CX1 is an X-rated capacitor. An X (across line) rated capacitor is a metalized film capacitor (also called box capacitor) rated for high voltage AC such as 230 VAC. They can withstand large transients, have a self healing property and is unlikely to cause short circuit even after failure. Their values typically range from 0.1uF and above which is dependent on the range of frequencies to attenuate. The CX attenuates DM noise by shorting and LCM cancels out CM noise. The inductors must always be designed to handle the required current. A typical common mode choke consists of a toroid made of ferrite and two equally wound copper coils. Each coil is connected in series with each wire. The SWG (Standard Wire Gauge) of the wire is selected to handle the required current. The inductance value of the common mode choke (LCM) could be 2-10 mH. 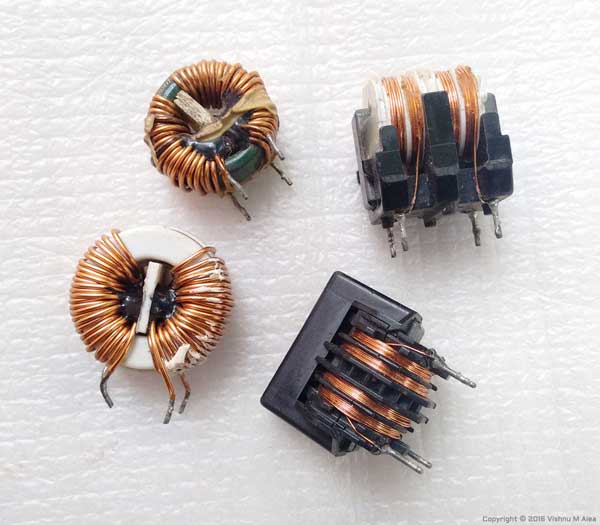 The CY1 and CY2 are Y-rated (bypass) capacitors placed between each line and earth ground (the "real solid ground"). They're usually low value capacitors with flame retardant coating. Connected between lines and earth, they bypass differential noise signals (ICMN) to ground. The resistor connected parallel to CX1 is called a bleeder, which is required to safely discharge the X capacitors so that it won't harm anyone, after removing it from the mains. These are high value resistors with a power rating of at least 1W. As per some standards, bleeder resistors are required to fully discharge all the capacitors within one minute or less. Typical values range from 100K to above 1M. The above figure does not show DM chokes or MOVs. The following one does which I designed for building myself. 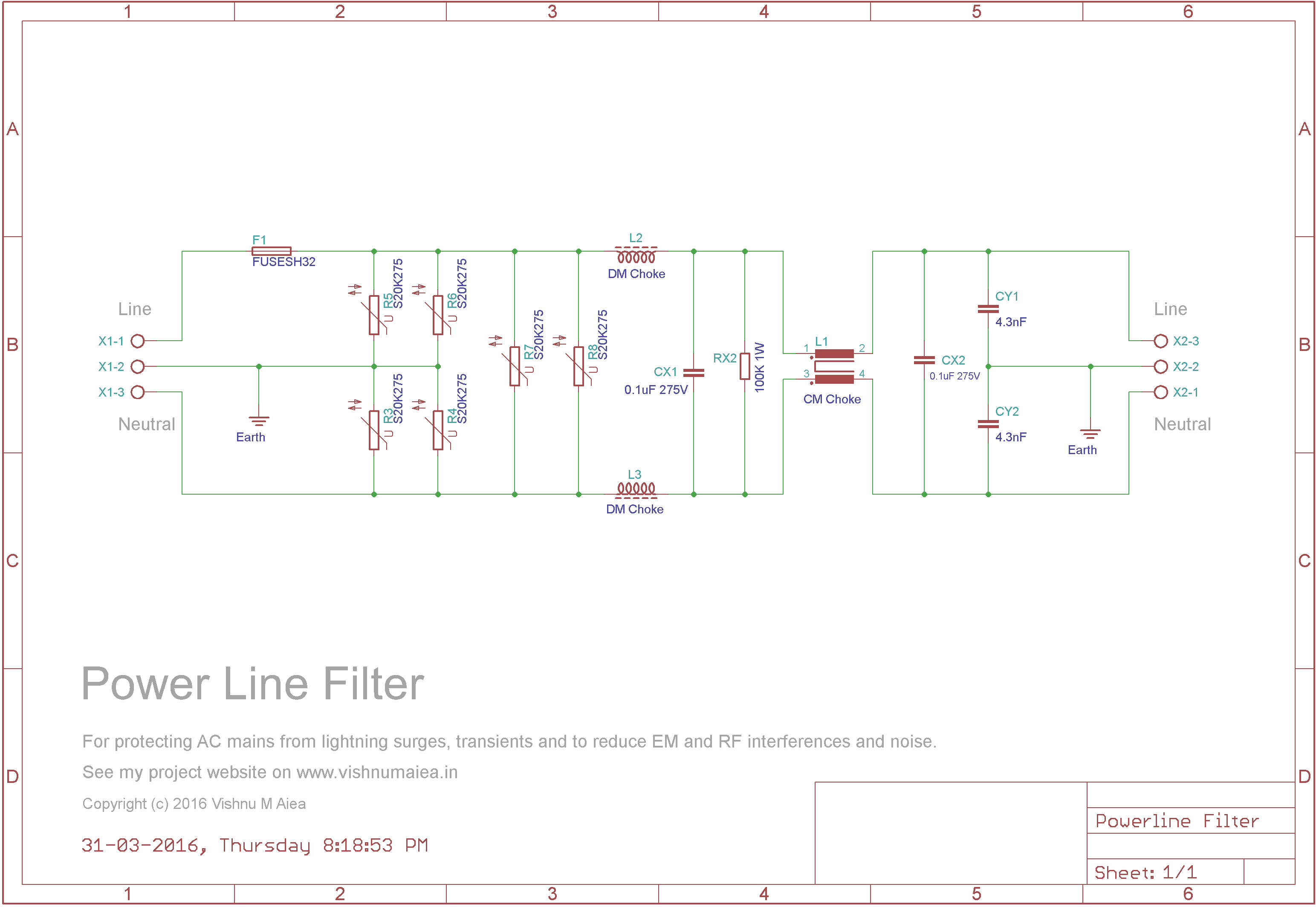 It does not have TVS diodes or GDTs because I couldn't buy them as they were not available. MOVs are very fast and efficient transient suppressors that can handle a very large current. It has a high resistance at low voltages (operating voltage). But when the voltage rise above the clamping voltage the resistance will drop and the MOV will shunt the excess current. I used 275L40 from Littlefuse, two of them parallel between L and N, L to earth and N to earth. Paralleling MOVs will increase protection. I used a 3.3M 1W resistor as bleeder. For DM chokes I used coils salvaged from old computer power supplies. The CM choke was made by winding 19 SWG insulated copper wire on a ferrite toroid core. For bypass I chose 4.3 nF Y-rated capacitors from Epcos. One thing I forgot to mention about was the fuse. Though a fuse is the slowest of all protection devices, it is a must have addition.

Soldered everything to a perforated board with thick lead tracks. To install the circuit I bought a PVC switch box and modified it a bit by adding a fuse holder, DPDT switch and the power socket. The finished build looked like this. 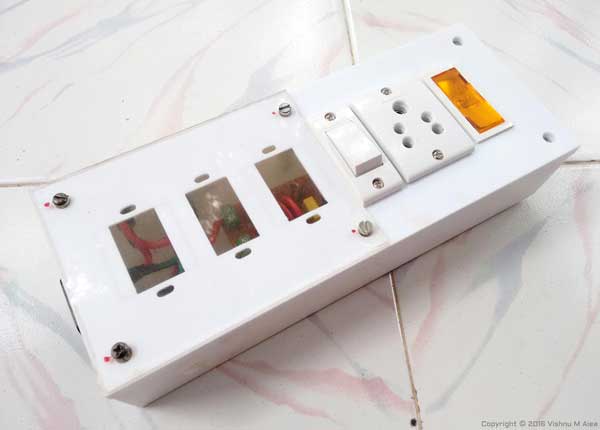 All pictures are shot with Moto G2. 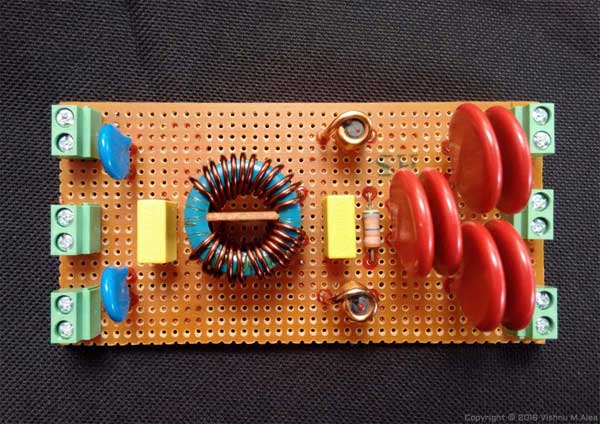 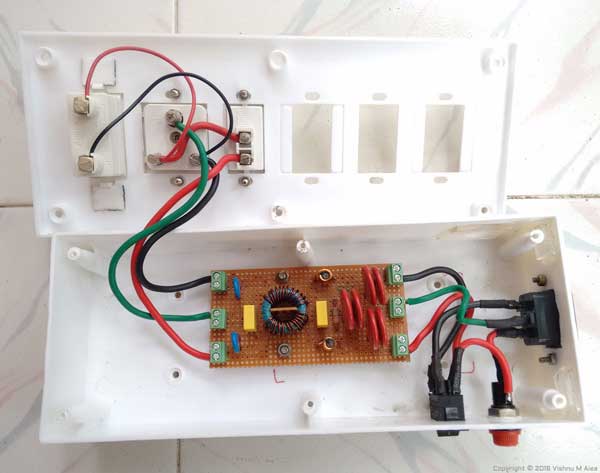 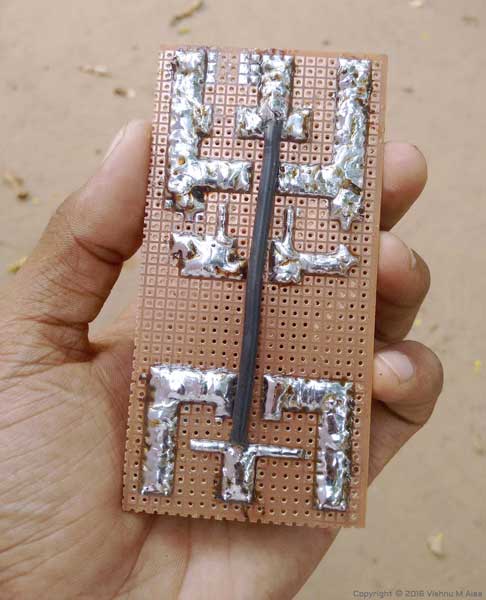 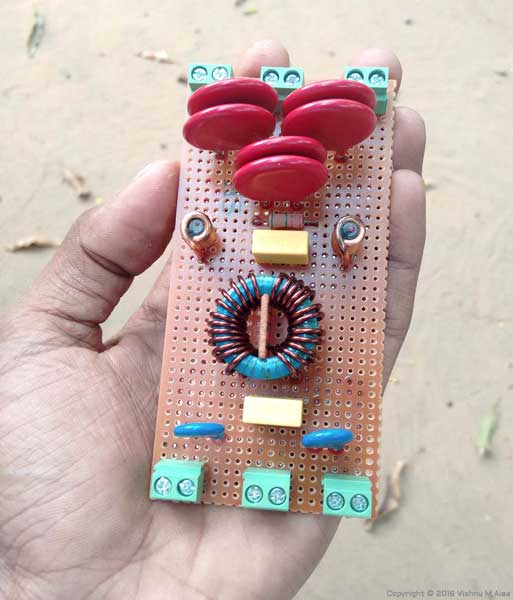 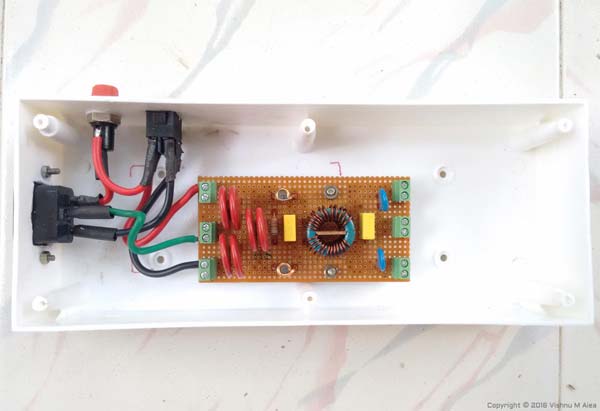 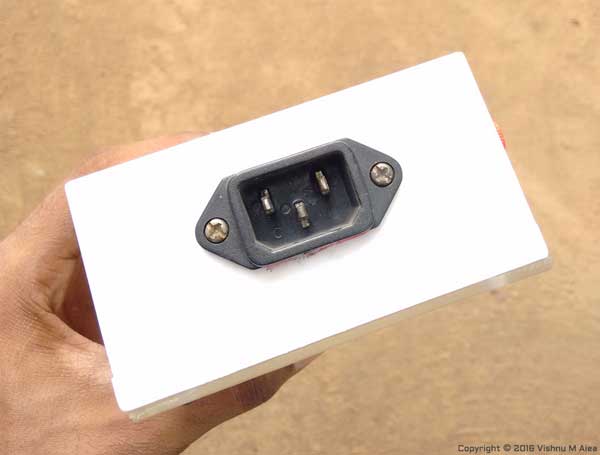 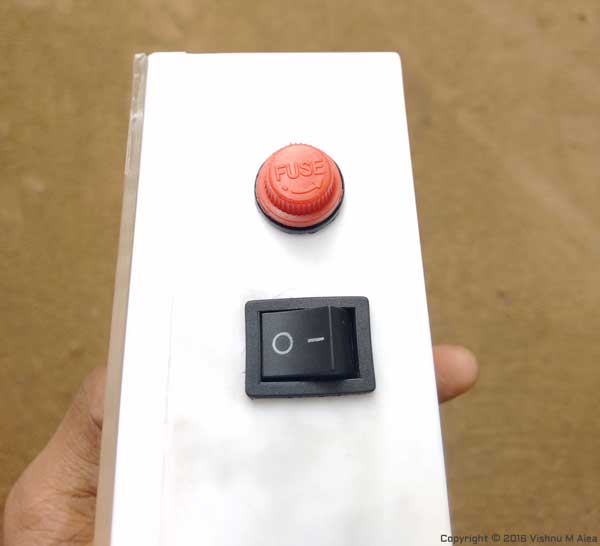 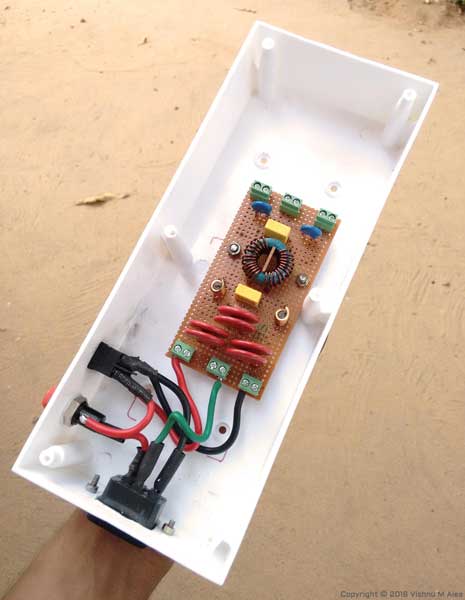 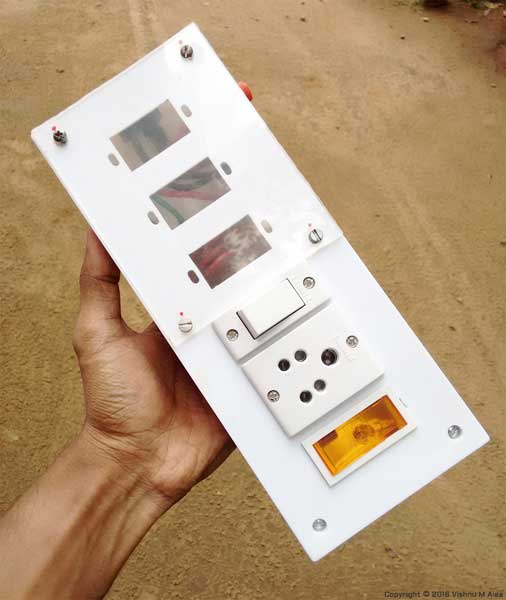 I hav also made spec sheet to stick on the box. 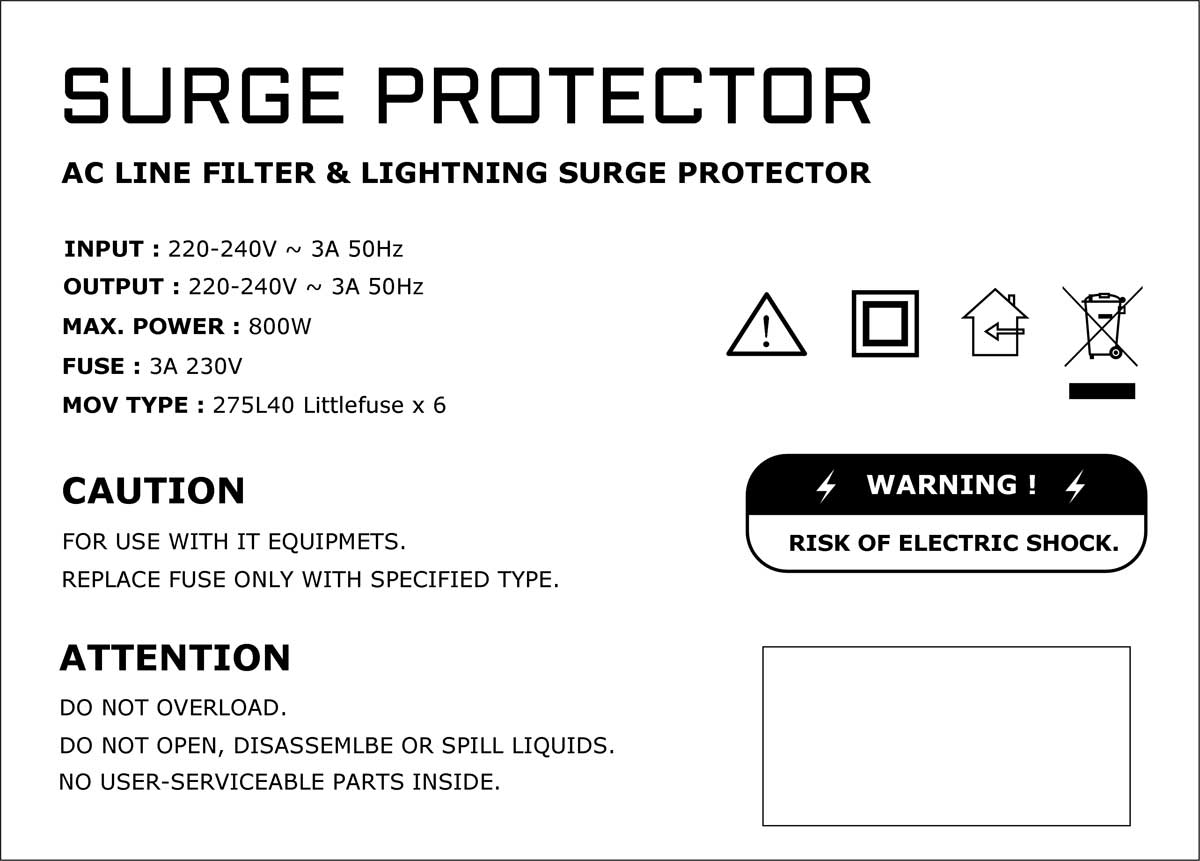