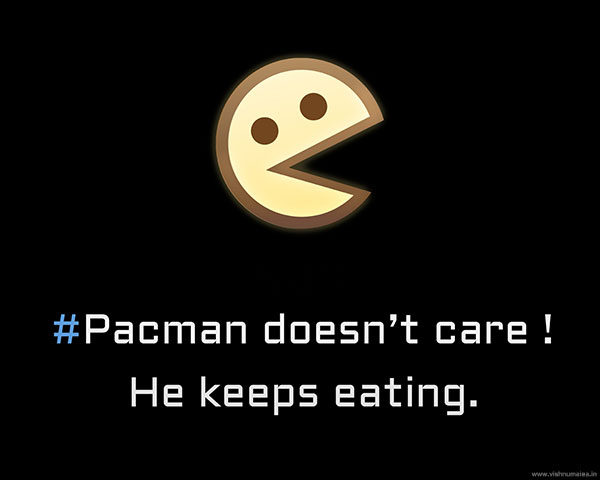 Theme : The Pacman emoji or emoticon is one of the many available emoticons in facebook chat and comment sections and it is textually represented by ":v" (colon and small letter v). This character combination is automatically converted to the above seen Pacman graphics if used in comments or messages in facebook. Every such emoji has a meaning that could be easily understood by looking at the graphical representation which, though rendered differently in different applications such as Hangouts and Whats App, except the Pacman emoji. It is something that confuses many people when to use this emoji because all other emojis represent a certain human emotion like smiling, laughing etc. So what is the meaning of the Pacman emoticon ? When do we use it ? I searched the web and couldn't find any answers. So I decided to give it a definition of my own. My definition is or I'll use this emoji when I have to say "I don't care !". The reason is obvious that a real Pacman character in a Pac-man game exhibits such a characteristic of neglectance. He knows he's surrounded by the enemies but he doesn't care about them and keeps eating the dots. The Pacman emoji is the best reply if someone tries to mock you or to mock them.