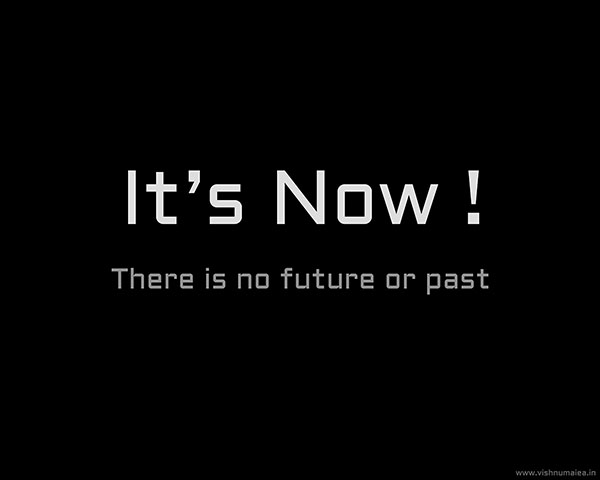 Subject : An image with black background with text says "It's Now ! There is no future or past" placed in the center.

Theme : The theme of this meme is time. We consider time as a measure of independent flow of being or existence. We've divided it as three; past, present and future for our convenience without even defining the clear differences of each. But does Science, Physics exactly agree with this common notion ? I don't think so. Physics has something else, or an another way of saying it, which common people find hard to understand and follow in their everyday life. And it is called the "now" state. Every time we think time passes leaving behind our current actions in the past, and advances into future, there's nothing happening rather than a 'state change'. For example, you're here reading this article and think you're in the present, but you were doing something else yesterday, and you know it happened only because you can remember it. Your memory enables you to recall a past 'state' even when you're no longer in that state, giving you a feel of past. So feeling of past is just an illusion or a technique your brain have been able to acquire in the process of evolution to differentiate between what you're currently perceiving (from your senses) and what you're remembering (experiences). Otherwise our brain would lose the distinction between reality (present) and pre-stored real experiences in the memory, which often happens when you dream. Nobody has been reported to be able to distinguish between past, present and future in their dreams; at least I've never been able to do that. This 'now state' theory can be well explained using the Conway's Game of Life -- a cellular automation algorithm -- in a much simpler way (with a bit of quantum theory though). But that is a topic for another post. So all you have to understand from this is that there is nothing as future or past, but the present, or the now or the current state. All happens is a state change from one to another.