FAQTERMSSITEMAP
Blog    Why do we count?

Why do we count ? 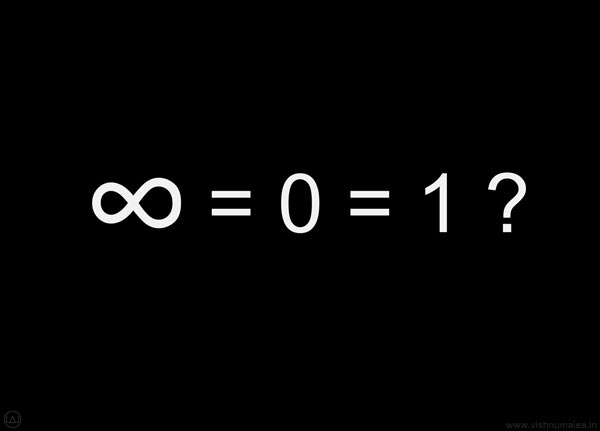 Was watching Vsauce's "How to count past infinity ?" video on YouTube and then something started baffling my mind. I thought I should write it down. My question is simple; what is infinity ? Just like we asked what random was. So what is infinity ? To answer that question we first have to define some primitive concepts like counting. Why do we count ? Why does count or a value or a measurement matter at all ?

Let's do a theoretical experiment. Imagine a hypothetical emptiness, where nothing exists. We don't know if that physically possible or not, but just imagine. If you think of regular free space it won't be completely empty. Because quantum physics asserts that such a space would contain self annihilating energy called Vacuum energy. If you feel that is a problem, you can remove the space also. Then we get complete emptiness. In such an emptiness, what is the importance of a count or a measurement. We measure the physical world, first because we can and second so that we can predict things, using mathematics as the key tool. But what if the count we count was changing its what we call and label as value, inherently ? For example you pick 'a' stone from the beach and put in your pocket and then it somehow started replicating and multiplying in some point in time. What is the importance of a count there ? What if everything was changing in such a manner ? It would be an 'uncountable universe' where no values, no constants can exist and no one can count anything. Are we in such a universe ? I don't think so, at least in the scale we live.

Our universe or the part of it seems to follow a very basic rule called law of conservation of energy, an important aspect of Thermodynamics. It suggests energy can neither be created nor destroyed. If that is a key characteristic of our universe then we're certainly living in a countable universe because otherwise things could appear out of nowhere at any time. That does not seem to be true. So we're definitely in a countable universe. In such a universe we can define things, we can have constants, limits, boundaries etc. For example the value of Pi, the theoretical value of it actually. But in an uncountable universe you can't theoretically have a Pi or even a constant value like 1 or 2. That's why the uncountable universe is so weird. You can not define anything there. It's a weird kind of mathematics.

Forget all that, now we know what kind of universe we are in. Let's talk about the importance of counting and why humans make a habit of it (we still haven't started the experiment). If we can measure a characteristic of our surroundings and use it as a reference for measuring further, then we can predict (calculate) how it is going to evolve in the future. For example if I know how much fast I'm driving my car, I can predict if I'm going to be detected on a speed camera and get penalized or not ;). Okay that was a terrific example but you get the idea. So predicting the future or understanding the present is all about counting.

We have a nothingness with a value of zero, but a count 1. Now there's an even tricky question; what is the boundary of your nothingness ? What is the size of zero ? Is it zero or infinity ?! But wait, how can nothingness have size ? If nothingness is nothing, it has 'zero' size. How many nothingness can be there ? If there can be multiple nothingness then each must have a boundary that separates one from other. If so, how can a nothingness have a boundary ? What is that boundary made of, theoretically ? That'll be conflicting. So it turns out that there can be only one nothingness and it has a value of zero or perhaps infinity. Why infinity ? Because infinity is not a large number or count, but rather a state where no count matters. Every count/number is countable but infinity is where count is meaningless. So you can't do mathematics on infinity like adding or subtracting numbers. Nothingness has a value zero, size infinity and count 1. It is where the soul foundations of our mathematics seem to merge to form a greater unity. A mathematical singularity!