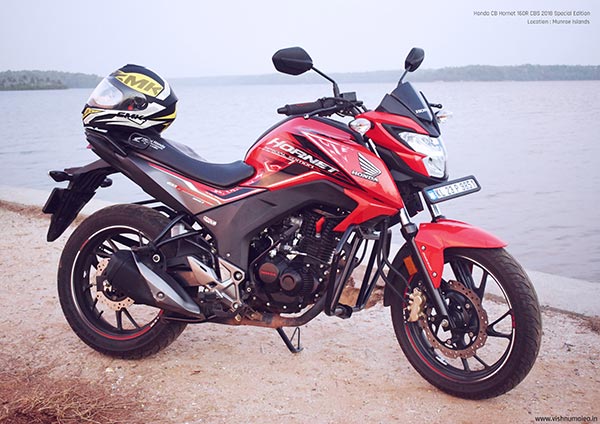 So it's almost a year since I got my Honda CB Hornet 160R CBS 2018 Special Edition variant. I think now is a good time to share all the experiences I had so far with this motorcycle. I call my bike "The Red Eagle" and you could guess why! He has only covered a total distance of around 6700Km so far. I know it is way too short compared to how a typical motorcycle is used. But that is because I did not have much time or reasons to go for long distance rides. I want to change that after this first year. My college is over and I'm a freebird now, and so I want go for some trips to explore new places. My last trip ended up terribly though. But that was a lessen worth for a lifetime.

The third and final "free" service was done on last Thursday and I had some problems sorted out. More on it will be down below. I don't think everybody else will have the same problems that I had, or the problems are a sure thing to anticipate. Every new bike would come with some hiccups here and there. You need to live with it to love your motorcycle. Let me now explain them one by one.

The seating position is ideal for me. It is not too upright nor too leaned, which is good for cities and highways. But the stock seat cushioning is inadequate in my opinion. Even a 20Km ride can heat up and numb your groin and butt; giving a hard time for your balls! I even have a seat cover installed but that doesn't help much. I have to rise every now and then to have some airflow under the bonnet. May be Honda was thinking it was up to the users to install seats of their choice. I haven't changed the seat yet, but will soon add some padding and a meshed seat covering on top. That will dissipate some heat and provide better long ride comfort, I hope.

I have the CBS version, and so I can't comment on the ABS feature. I'm also not sure if the ABS model is inclusive of CBS. Whatever that is, braking is okayish on the CBS. Why that is because, not sure if this is technically correct, but I think when you push the rear brake lever, some force is redirected to the front calipers (that's how Combi system works), due to which you need to apply extra pressure on the pedal. Have you ever felt so?

Both the front and rear brakes are super smooth to operate and I never had any issues such as abrupt locking or anything. Nissin brakes are dependable. Though, you need to occasionally clean the pads to get the best braking performance. 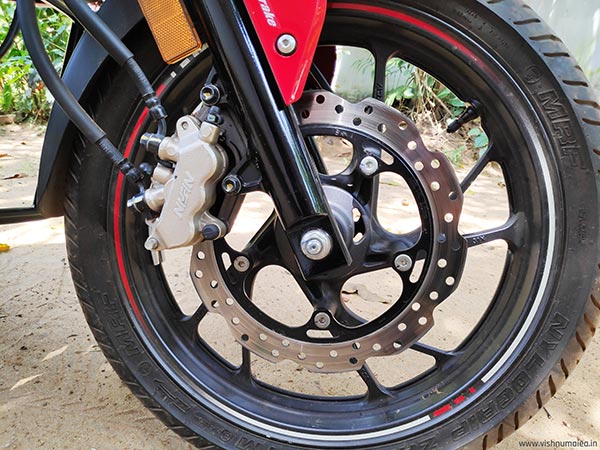 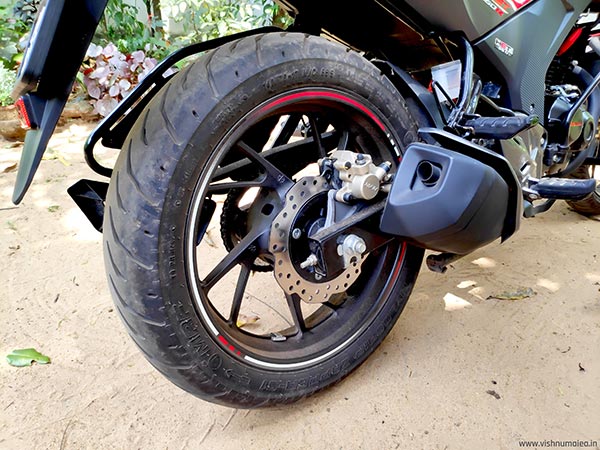 I'm not much attentive of mileage. But a good mileage means your bike performs well as it should. I think I get around 45-55Kmpl on moderate city and highway rides.

Rear suspension is on the stiff side as validated by many users and reviewers. If you weigh 70Kg+, longer humps and gutters will feel smooth as you ride. But if it is otherwise, the shaking will surely reach your back. One solution is to use well padded seats and another is to adjust the monoshock to a softer pre-load adjustment level. But such an adjustment depends on the rider's weight.

The new version comes with split LED headlights for improved night time visibility. The previous version's headlamp is known to produce inadequate luminance to ride at night. Honda must have received the feedback and decided to use LED in the new version, presumably. Yet, from my experience I think the LED brightness is still low compared to other bikes with LED headlights. One reason is because the color temperature of the light produced by the LEDs used in the new headlight is more blueish-white (~4500K) with insufficient output power. In that case, the blue light (higher frequency, shorter wavelengths) will get quickly absorbed or scattered by the surroundings and travels less distance. On the other hand, the warm light (~3000k) produced by a Halogen bulb of the same power can travel longer distances without much absorption loss. This will provide better visibility as we will be able to better discern the relative positions and distances of the objects we are looking at. So Honda was wrong to add low power LEDs with cooler color temperature. The solution for this problem is to add auxiliary lights. 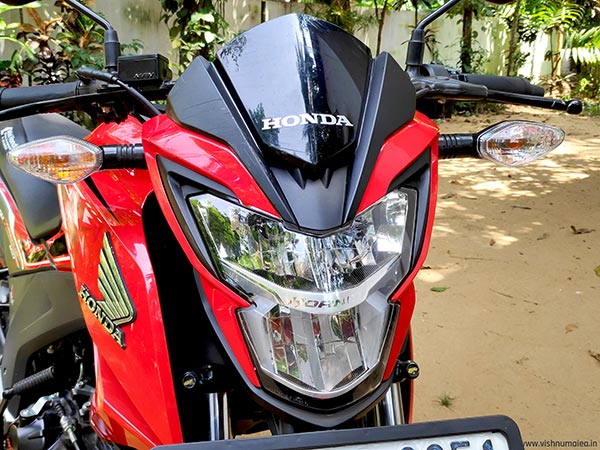 Honda's transmissions are generally smooth and precise. But when you test a new bike, the gear shifting can be hard and might produce a clunking sound, especially when shifting from 1st to 2nd. This is for two reasons; first, gearboxes are designed to be smoothen over time, and second you're shifting at wrong RPMs. Many of my friends who ride other bikes said the second gear on the CB Hornet 160R was hard to shift. I had to say them that the RPM range from 1st to 2nd was narrow, and they had to quickly shift to 2nd just after 1st. Gears from 3rd to 5th are smooth to say.

The new model comes with low maintenance chains which has O-rings between each links. This helps retain the lubricant longer and prevent run-off at higher speeds of rotation. I use Motul chain cleaner and lubricant whenever I see the chain is dry. I never had any issue with loose chain or excessive wear. That is not only because I keep the chain lubed, but also that I do not do quick accelerations. The output from the engine is linear and so I go along with it. The slack of my bike's chain stayed more or less the same for that reason. 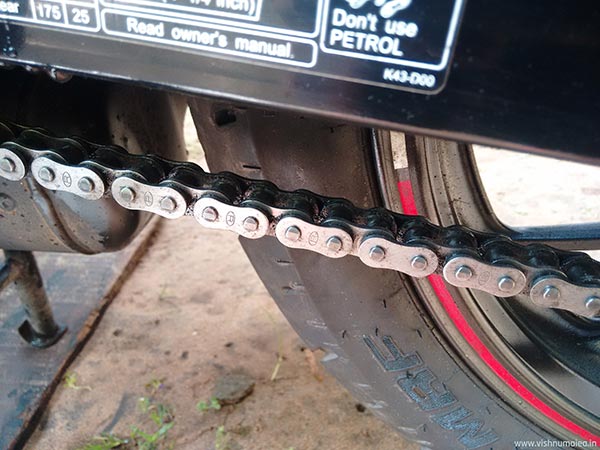 This is what makes me shake my head. I'm still not sure why, but my rear tyre is getting worn out unevenly. The right side of the MRF tyre is wearing out more noticeably than the left side. I noticed this problem about 4 months ago. I first thought it was due to misalignment, which had been the case then. So I corrected the alignment myself. But even after that, the problem persisted. At the time of third service, I brought this issue to their notice and they said it was due to worn out bearings. I replaced the bearings as per their recommendation. Even after that, I feel the issue is still there.

Uneven wear can occur due to another reason. If you think of the cross-section of a road, it is not completely level. Instead, the center of the road is always raised to some percentage of the width. This is to help rain water run-off quickly and thus preventing damage and ice formation. It is called "crown of the road" or simply "crown". Read more about it here - Geometric Design of Roads. 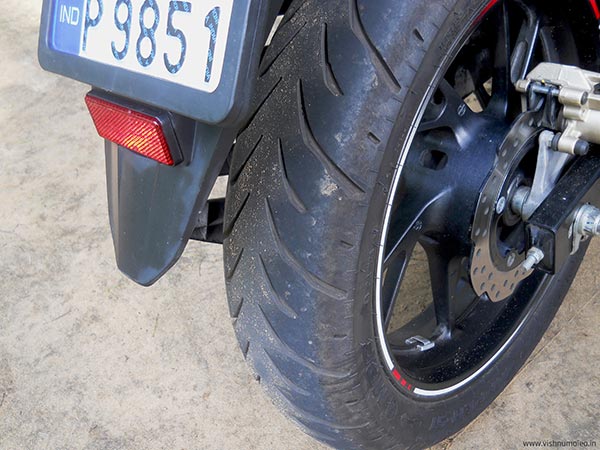 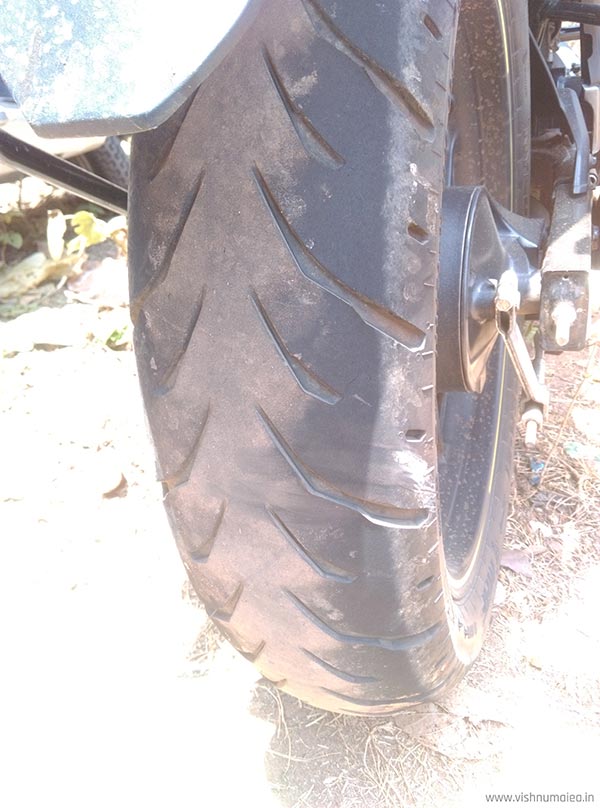 That's all I have to share for now. I will be adding some accessories to improve the practicality of the bike, such as auxiliary LED lights, windshield, knuckle guards, adjustable clutch and brake levers etc. I will share the details of suitable accessories and the installation procedures in a later post. Ride safe.